This is an energetic and enjoyable ice skating program. The goal is to develop balance, coordination and rhythm through the use of music, props, and aids. Skaters will be introduced to the correct technique for forward skating, backward skating, stopping, turning, and jumping.  Incentives (certificates, stickers) will be utilized. This program is to encourage a lifelong participation in skating while promoting physical fitness.
The Number One Goal is to have FUN!

A dynamic new program that focuses on teaching and mastering strong basic skills earlier to prepare skaters for all ice sports – hockey, and figure skating. On-ice delivery focusing on continuous movement emphasizes the use of newer and more dynamic group teaching concepts including the Fast Track, Fun Zone and station rotation all of which has been proven to increase practice opportunities and improve the rate of skill acquisition among skaters.  More visual aids and music are used to create a fun, stimulating and welcoming environment. The session also includes progress report cards and an exciting new series of award ribbons to achieve, in addition to the Level 1 to 6 badges.

It’s never too late to learn the skills needed to play the fast paced game of hockey, especially if you are trying to keep up with your son/daughter on the ice. Adult hockey classes are offered to men and women who want to learn more about the game. These classes are a great workout in a fun environment that encourages your development as a hockey player.

Along with developing stronger skating skills through power skating, we will incorporate skills such stickhandling, shooting, and passing that will later progress into offensive and defensive concepts. This is a great group activity! It will help you be a step closer to participating in the MAHL (Mid America Hockey League). Basic skating prerequisite is required.

Private lessons offer individualized training designed to be customizable and skill specific to each player. This is the best possible training environment to take your player to the next level. Sessions are 30 minutes long and offered at a variety of times based on age.

The McKendree MetroRecPlex requires all of our coaching staff to be certified by USA Hockey, or the Professional Skating Association as well as be an active member of the USFSA. This ensures that the highest level of training is available to our members and skating students. Our goal is to provide the best on ice lesson experience as possible with our enthusiastic coaching staff. 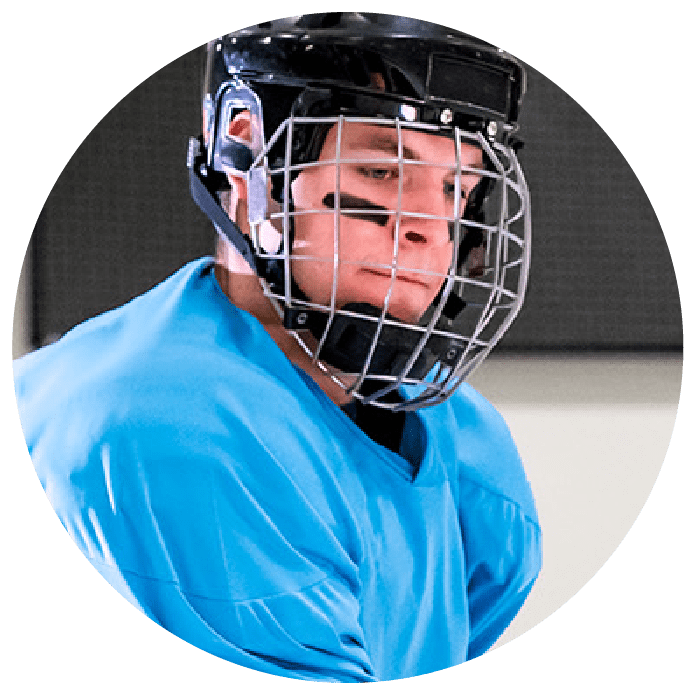 Aleks is originally from Riga, Latvia where he started playing hockey at the age of 5. He played majority of the career in the Prizma/Pardaugava hockey school system. After 2014-2015 season Aleks signed with a junior team in Dallas, Texas, Dallas Snipers in WSHL and played 2015-2016 and 2016-2017 seasons. After Dallas Aleks was recruited by McKendree University Hockey to play hockey and study. While with McKendree Hockey team, Aleks has been part of two conference championship titles at D2 level and one conference title at D1 level. Aleks has been part of Metro Rec Plex coaching staff and has been instructing power skating, plex skate, hockey camp programs, as well as providing private hockey lessons to advanced level skaters and running a Future Stars development program for 14U to 17U players at Metro Rec Plex.

Dmytro (Dima) Golovko was a native of Kyiv, Ukraine. Coach Dima brings elite-level international and domestic playing experience to the coaching staff . He has an impressive playing career including ACHA D2 and National hockey levels. Dmytro played hockey since he was 10 years old. He had played in the number one club in Ukraine, special National Ukrainian Hockey Team , US Junior Varsity/Varsity, AAA/Prep school “Compete Hockey Academy” in Washington State, and USPHL U-18 Premier in Massachusetts. In 2016, he started playing for the McKendree University D2 Hockey team. Dmytro was also invited to a special skill camp in Russia called “Hurricanes” & asked to play with the Ukrainian National Team. He gained experience teaching camps and giving private hockey lessons when he went to Ukraine during summer and winter. Dima has worked with the McKendree Metro Rec Plex since the day it opened. Dima graduated from McKendree University with an undergraduate Business degree in Economics and Finance major and Accounting minor. He continues working on an MBA in Corporate Financing. He remains a current member of the McKendree University D2 program where he has led the Bearcats to league success in the past several seasons. Dima also assists with the Metro Rec Plex administration & ice rink coordination.

Dyan Mueth is a former McKendree Hockey player. After playing four seasons for the Bearcats’ now-ACHA Division 1 squad, Mueth also served as an assistant coach within the program. He was team captain in his final season as an active player in 2015-16, when McKendree reached the ACHA National Tournament held in Grand Rapids, Mich. Mueth is also the only McKendree player to have appeared in both of McKendree’s ACHA National Championship Tournament’s 2010-11/2015-16.

During his McKendree playing career, Mueth tallied 93 goals and added 62 assists for 155 total points. He led the Bearcats in scoring during the 2014-15 season with 26 goals and 20 assists for 46 points. Mueth helped lead McKendree to 57 victories over his four years on the roster, which included a 19-win campaign during the run to the ACHA Tournament in 2015-16. In the classroom Mueth graduated with a Bachelor’s Degree in Physical Education and a Master’s Degree in Higher Education Administration.

Upon leaving McKendree after one season of coaching, he headed to Superior, CO in 2016, Mueth took an assistant coach position with the Superior RoughRiders in the Western States Hockey League Junior A hockey league (28-26-2). In the following season in the Colorado with the Rocky Mountain RoughRiders AAA organization, Mueth assisted with the 12U/13U/16U teams along with serving as the Skill Director for the Boulder Hockey Club youth organization.

Benjamin Leonard began playing hockey in a small town in Ely Minnesota.  Moving to O’Fallon in high school, Ben was a 2002 graduate of O’Fallon Township High School where he was Varsity Captain both junior and senior year.  Playing 4 years at the varsity level, Ben went to 3 championships and was an integral part in helping the O’Fallon Ice Hockey Club to their first championship in club history in 1999.  During those years, he was a two-time MVCHA All-Star and All-Star Captain.  Ben also played in the Southern Illinois IceHawks Hockey program and was captain of the Midget team both junior and senior year.  After high school, Ben played college hockey at SWIC. Coach Ben has been an Assistant Coach for both SIIH Midgets, The O’Fallon Ice Hockey Club, and was Head Coach for The OIHC.

Hockey Bootcamp training sessions will be led by McKendree MetroRecPlex instructors, who will help improve the hockey players’ skill set. The first portion of the class will focus on power skating, followed by stick handling, passing, and shooting. The session concludes with skill reinforcement drills.

Each week will have a progressive focus/format to help the player get back into playing the game with confidence.

The first portion of the class will focus on power skating, followed by stick handling, passing, and shooting. The session concludes with skill reinforcement drills. Each week will have a progressive focus/format to help the player get back into playing the game with 1 instructor to 5 players (1:10max). See MMRP social distancing protocol in effect. Spectators limited to 1 per participant.

Come and see us!